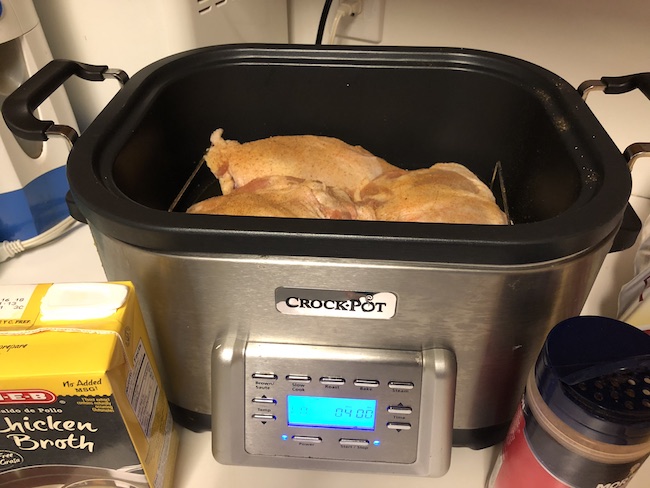 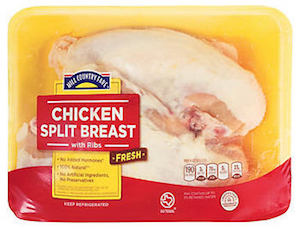 One of the easiest ways to save money in your budget is to use shredded chicken from bone-in chicken.  It's a lot cheaper and if you do it in the crockpot, it has more of a rotisserie taste to it than boiling chicken.

I often will shred chicken on Sunday and throw it in meals most of the week.  Some recipes like this Chicken Pot Pie Crescent Ring can be put together in like 5 minutes if you already have the chicken ready.

I recommend the Split Chicken Breasts that look like the image.  Ones at our store are about 3-4 pound packages which will yield enough meat for two casserole dishes of recipes like Chicken Enchiladas Casserole or Chicken Bacon Caesar Bubble-Up Bake.

I have a 5 in one crockpot which has the meat grill insert (in top image), but you can also do in a large crockpot with a crockpot liner bag.  Take chicken broth and pour in to the height of the grill insert or about 1cm deep in regular crockpot.  Then coat it thickly with seasoning.  Season-All is my favorite, but Lowry's or rotisserie chicken seasoning work too.

I cook on low for about 4 hours, but if you have a smaller one than pictures, you may need to cook longer. The key to the shredding is tongs.  If you have a decent set (metal tipped ones work best), you can pull the outer skin right off.  Then just grab chunks of meat off and throw on a cutting board.  You don't have to get crazy pulling every little piece of meat off.  There is a ton and you have already saved money by starting with bone-in.

Use two forks to take the chunks and shred.  I will then take a fine strainer and pour the liquid from crockpot into a measuring cup.  If you are storing the chicken for later, put in the fridge or freeze with a decent amount of broth in there.  Also, if my chicken is ready ahead of time, I will put the shredded chicken back in the crockpot on warm with all the broth. 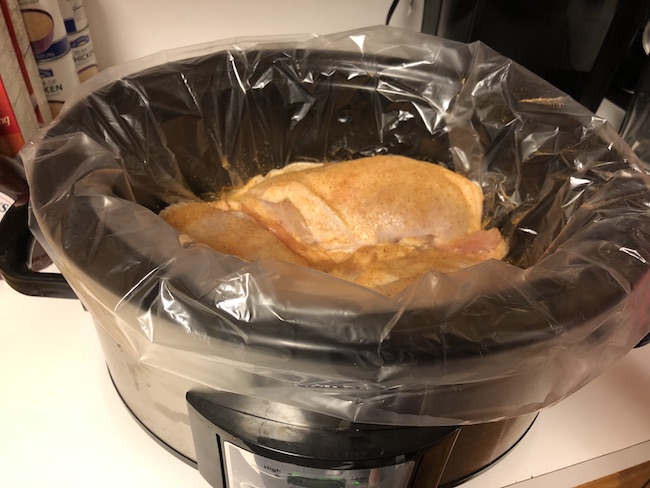