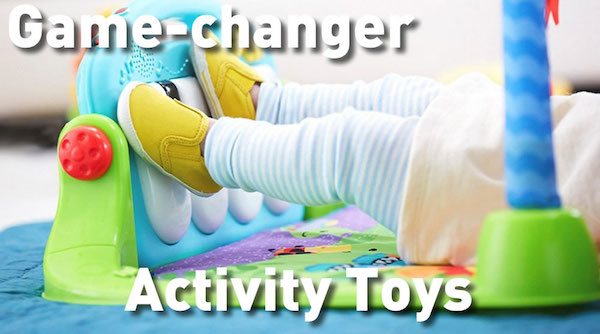 Between a baby shower, gifts from friends and family, and the things you bought for your little one, you will accumilate A LOT of toys.  However, most of them will have little impact on your child.  These are items that seemed to have a direct cause and effect with helping my baby girl's developmental growth, organized by milestone.

As a sidenote, I have bought almost nothing brand new for my daughter and will probably do another post on finding good used baby stuff.  However, I have the links to Amazon setup so you can read reviews, add to your Baby Registry, and price the items.

When my daughter was a newborn, I would lay her in her activity mat and she would lay there, occasionally batting the hanging toys.  Then I got the Fisher Price Piano Gym.  Within a few days, she was kicking around like crazy.

I never really found anything that helped with them.  My daughter hated laying on her tummy and the only thing that I found that helped was laying her on my chest and leaning back on the couch, so it was more of a 45 degree angle than a 90 degree angle.

We had plenty of stuffed animal rattles around the house, but they were rather muffled. My daughter could really grip these with her hand and loved how loud they were. It was an easy toy to throw in her diaper bag or car seat to keep her busy while away from the house. 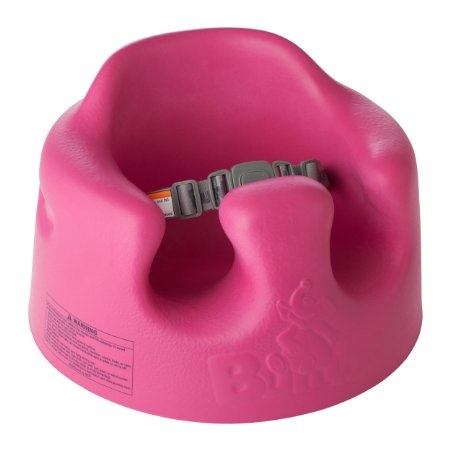 When my daughter was small, we called her Noodle Head because she flopped around so much.  The Bumbo was awesome for helping her sit up, work on her core strength, and generally just be content so I could get some things done.

There is just something about stacking up blocks in front of a small child.  My sweet little girl would be instantly transformed to Babyzilla, knocking any stack as far as her little arms could fling them.

Sleeping Through the Night:

We moved my daughter to her crib at three months old and had this toy there from the get-go.  The ocean sounds and lights seem to help her settle down and it stays on for 20-30 minutes, incrementally getting quieter and dimmer.  Plus, she can turn it on herself by hitting the orange star, so there are many times she will wake up at 3am, turn "Nemo" back on and go back to sleep.  Any toy that keeps me from having to get out of bed in the middle of the night should be cast in gold.  Whenever we travel, we drag this along and put it in her pack and play.  Disclaimer: Nemo likes to dine on 4 C batteries, so I suggest buying them in bulk so you don't see the Red Light of Death in the middle of the night (just the sight of it will make my daughter cry).

For like two months, I kept thinking my daughter was going to crawl "any day."  She would get all positioned and then kinda rock back and forth.  However, putting a ball in front of her finally helped motivate her to get going.  By that time, she wanted to grab things but the ball would roll away, enticing her to go get it.  This particular one was a bit easier for her to grab, but the Dollar Store $1 ball helped as well. 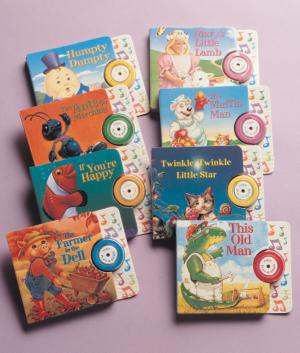 These books are only $3 and my daughter LOVES them.  It only took her about a minute to figure them out and she entertains herself plenty just sitting there hitting the button.  Disclaimer: You will hear the same song over and OVER and since the song re-starts every time they hit the button, it can sound like a bad DJ remix of "Mary Had a Little Lamb."

This door jumper is very sturdy and connects/disconnects very easily.   It took my daughter a little bit to get the hang of it, but now she jumps around like a maniac hopped up on sugar.

This table has lots of different musical sounds and does words in English/Spanish.  It is sturdy enough not to tip over when she pulls herself up on it and it keeps her standing for long periods of time.  As a plus, the legs are removeable so when she was really wobbly and I didn't have time to watch over her, I would remove two and tip it upright for her.

We call this toy the "Horse Trainer" because it reminds me of how horses walk in a circle for exercise.  This toy has lots of entertainment and allows my daughter to walk around safely.  I prefer this over the stand alone walkers because I don't have to chase her around the house, and I can work at my computer knowing that she is safe.  As a plus it has a tray to put snacks.  This results in her grabbing Cheerios and eating while walking which becomes quite amusing as the beagle tries to steal the Cheerios and then yelps because he got run over.