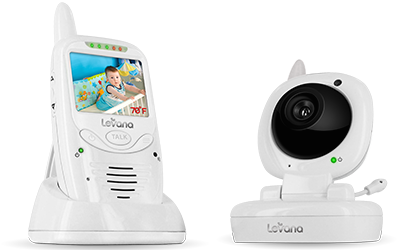 We have the Levana Jena Baby Monitor which we loved initially. Great video even when dark, good features like Peep Mode (that puts it to sleep and turns back on when sound), and decent range. However, after awhile, it started losing signal for a few seconds at a time.

That does not sound like a big issue in itself. It is not that I thought my toddler was going to set the house on fire in the span of 3 seconds. However, when it loses signal, it gives out a loud piercing beep that is supposed to wake the parent to let you know it is not receiving. Although I agree with that concept, it seems like they could build in a feature to have it wait a full 10 seconds of no connection before startling an already sleep deprived parent. This ended up occurring about every 30 minutes which makes for a long night. Since it took me 3 months to solve this, I felt the need to write a post about it.

I googled the problem and found a few possible causes. Being the programmer I am, I systematically tried these things one at a time to isolate the cause:

1. Receiver too far away from camera

Left receiver one room away to see if still occurred.  Do not test in same room because you can have interfence if too close.

2. Receiver has too many obstacles between camera

Set up camera at one side of large family room with receiver on other.  As a sidenote, I learned that literally the worse obstacle you can have is an aquarium because water stops wireless signals more than almost anything else.

4. Conflict with other baby monitor (or similar device)

Checked with neighbors to see if they recently added a monitor or smart house options like Nest, etc.  Since we run multiple cameras on the same receiver, we unpaired one.  We also bought a second receiver.  We then bought an cheap Motorola audio only monitor for the toddler's room and only used the Jena for the baby.  Still happened.

I read one Amazon review about a faulty power cord to camera.  Since I ended up with two units, I tested the cord on both and it seemed unlikely they were both faulty.  I also checked the battery charge of the receiver.

This represented 3 months of trying to fix the problem.  Everything I read said the Lenava's were one of the best brands for not losing signal.  During this time, the Lenava Jena receiver may or may not have been thrown against the wall on a particular night when the baby got up three times, the toddler once, and the dog threw up.

However, one day I was sitting on the floor in the baby's room playing with the girls and I noticed that the light on the power strip would occasionally flicker.  I took the Universal Power Supply (UPS) from my computer and plugged the baby monitor camera into it overnight to test it out.  And......it worked.  Thank God.  Hope this helps someone.